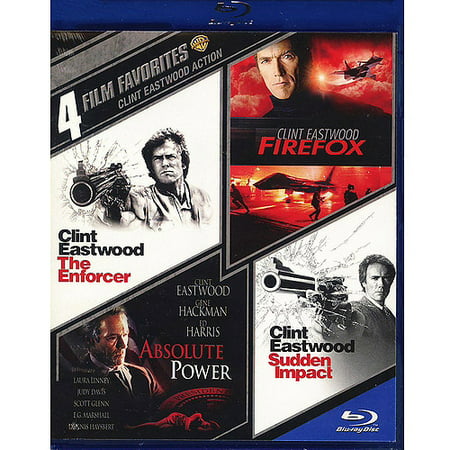 “Firefox”: An ex-flyer who is a distress victim from Vietnam experience is ordered back into military duty to head a secret mission. His assignment is to sneak into Russia and steal a Soviet warplane which is far more advanced than any other air machine being used by the NATO alliance. “Absolute Power”: He was there when he shouldn’t have been and saw what he shouldn’t have seen. Now, who will believe the word of a career thief and ex-con? Who will trust Luther Whitney when he says he saw a woman killed and that the man responsible for her death is the President of the United States? Clint Eastwood portrays Whitney and directs this crisp, finely acted thriller based on David Baldacci’s best-selling novel. “The Enforcer” has Inspector Callahan (Eastwood) paired with a new partner, policewoman, Inspector Kate Moore (Tyne Daly), as they hunt for a group of terrorists that are blackmailing the city of San Francisco for two million dollars. Callahan, none-too-pleased by being teamed up with a woman, must put his job first and the two attempt to shut down the terrorists. Moore, however, proves herself after she and Callahan pursue the terrorists to their hideout in the prison of Alcatraz. “Sudden Impact” follows Inspector Callahan (Eastwood) as he’s shipped to San Paulo, a small town down the coast to investigate a murder. The killer is Jennifer Spencer (Sondra Locke) who out for revenge is murdering all the rapists that gang-raped her and her little sister 10 years ago. During his investigations, Callahan becomes entangled in Jennifer’s own troubles – all the while never suspecting that she’s the killer. Subtitles: English SDH (Subtitles for Deaf and Hearing Impaired). “Firefox” is Rated PG, All Other Films are Rated R.